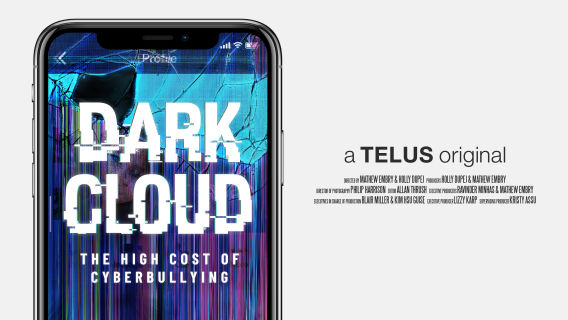 Join us for an empathetic and grounded screening and Q&A on the realities of cyberbullying and how you can fight against digital harassment.

There will be two screenings:

Dark Cloud: The High Cost of Cyberbullying explores the devastating impacts of cyberbullying on the lives of young people. This documentary tells the human story behind the growing epidemic deeply affecting the mental, emotional and even physical well-being of today’s youth — the toll of cyberbullying and digital antagonism — through the eyes of Carol Todd. Carol is the mother of Amanda Todd, the B.C. teen whose suicide after two years of bullying, exacerbated by a cyberstalker, became a flashpoint for global action and gained her the label “The Girl Who Woke Up the World.”

Dark Cloud follows Carol’s ongoing fight for cyberbullying awareness, unfolding the much larger story, introducing us to families who have endured similar experiences and some of the most important anti-cyberbullying experts in Canada. Weaving their expertise and experience together, Dark Cloud illuminates the statistics, clarifies the long consequences of cyberbullying and shares insights into both cyberbullying’s causes and its prevention.

See the trailer below.